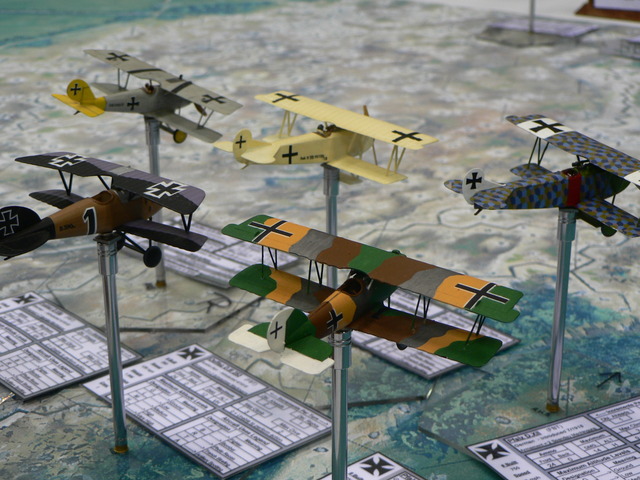 Extrapolated from a review by Ken TidwellAerodrome is a miniatures game of aerial combat during World War I. Players take on the role of biplane pilots and tail gunners dog fighting their way through the gray skies of Europe during the war to end all wars. The game is visually appealing and, like many miniatures games, it was easy to project myself into the scenario. The game is played using 1/72 miniature aircraft mounted on radio antennae with a clear acrylic hex base to hold the whole thing upright. The game board is an aerial view of a WWI battlefield marked off in large hexes.Pilots and gunners plot out three moves at a time. Each move the pilot chooses from one of eight maneuvers - straight ahead, straight ahead fast, left slip, right slip, right, left, hard right, stall, and Immelman. The slips allow the player to retain their current orientation but slide one hex to the right or left. Ahead fast allows the plane to move two hexes. Ahead, left, right, and hard right allow the plane to change orientation and move one hex in that new direction. An Immelman allows the plane to move forward one hex but completely reverse orientation. A stall allows the plane to stay in its current hex with the current orientation but runs the risk of throwing the plane into a spin. Planes can fly on one of five altitudes. Descent is always possible but planes can generally only ascend when moving forward and trying no wild acrobatics. After movement, pilots may fire on any plane unlucky enough to find itself in their path.Online Play http://www.aerodrome1online.com/board/ Home Page: http://www.aerodrome-ww1aircombat.com/ - BoardGameGeek